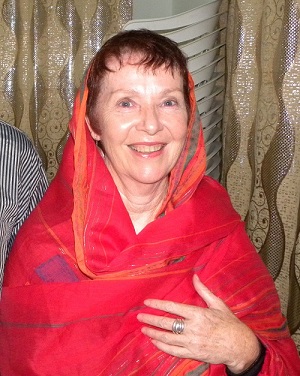 In 1912 the International Committee of the Red Cross established the Florence Nightingale Medal. It’s the highest distinction for a nurse – bestowed for exceptional courage and devotion to victims of armed conflict or natural disaster. It also recognises exemplary service or a pioneering spirit in the areas of public health or nursing education.

In 2021, Australian nurse Bernadette Gleeson, known to all as Detta, was posthumously awarded the Medal. This award recognises her decades of service, humanity, courage, and selflessness.

“Ms Gleeson was a champion of humanity who represented the very essence of the work and ethos of the Red Cross, and an incredible woman of exceptional courage and compassion,” Australian Red Cross President Ross Pinney said. “She risked her own life to care for people in some of the most dangerous places in the world – where complex health challenges are compounded by conflict and political unrest.”

Detta worked with Red Cross in Afghanistan, Kenya, Sudan, Ethiopia, Pakistan, Somalia, Libya, Nigeria and Lebanon over almost two decades. She worked in some of the most insecure environments in the world, caring for people facing complex health challenges compounded by conflict and political unrest – including evacuating the wounded while under active gunfire, calming shocked victims of conflict until they felt safe enough to leave the country, and mentoring and supporting younger nurses.

“Detta was known for her compassionate and warm approach and recognised as a leader and mentor, inspiring people in the health field and more broadly across the Red Cross Red Crescent Movement,” Australian Red Cross CEO Kim Pfitzner said. “She used her skills in nursing, leadership and coordination to improve the lives of patients, colleagues and communities.”

Detta died of leukemia in 2017, but the stories from friends and family bring to life her outstanding service. Friend and former colleague, Bruno recalls her unwavering commitment in Libya – just one of 16 missions she was deployed to across nine countries.

“On two occasions, we crossed the frontline to evacuate the wounded. The first one happened during the day. The shaky ceasefire accompanied us and I could fully rely on Detta to sort out the wounded and arrange them in the Land Cruisers. We stayed a few days more in Kufra, trying to organise a second evacuation. Violence was so high that we had to leave the city and seek refuge on a nearby hill.

“Eventually, the second evacuation took place. Around midnight, in one of the most remote places on this planet, we lined up eight Land Cruisers. Detta was behind the wheel in one of the cars. We drove on roads that were not cleared from mines, snipers shot at us, we had to switch off all lights and finally arrived at the makeshift hospital where total hysteria was waiting for us. Detta’s firm calmness arranged for the evacuation. Under her command, like a director in front of her orchestra, she organised the various vehicles, fixed a bandage, gave a nice word to a mother in tears, ordered those carrying a wounded on a stretcher. An endless night.”

As we recognise Detta’s service, we remember her open heart, strength, deep understanding and appreciation of human nature, modesty, support, kindness and her commitment to humanity. And on behalf of all who she helped around the world, the patients she cared for and the people she mentored, we say thank you.