Promoting the laws of war 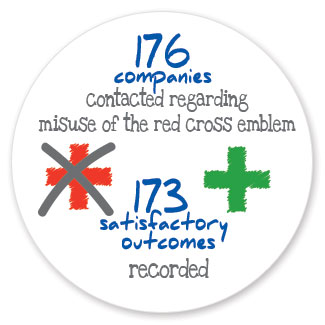 All Red Cross and Red Crescent National Societies are bound together through a statutory obligation to uphold the principles of international humanitarian law (IHL).

International humanitarian law protects people in war. To ensure it is respected and upheld in times of armed conflict, it must be understood in times of peace. Both in our capacity as a Red Cross National Society and as an auxiliary to the humanitarian services of our government, we aim to promote IHL principles to key target groups and the Australian public. This year we continued to develop understanding in the broader community that ‘even wars have laws’ through training courses, public events and campaigns. We continued to engage in a targeted way with key stakeholders – government decision-makers, Red Cross staff and volunteers, legal professionals, and those that directly use IHL such as humanitarian workers and the Australian Defence Force.

We held the annual Humanitarian Law Perspectives Seminars in conjunction with law firm King & Wood Mallesons in five states and territories, attracting legal professionals focusing on the interplay between IHL and international human rights law. This year we implemented a new strategy of engaging lawyers who advise mining companies operating in areas of armed conflict. Our pilot seminar was held in Western Australia and resulted in strong interest from sector stakeholders and members of the Red Cross and Red Crescent Movement who are keen for us to expand this area of our work.

As part of our engagement with both international delegates and members of the public on IHL issues, during the Statutory Meetings of the Red Cross and Red Crescent Movement we displayed a replica of a war-damaged ambulance in a busy tourist area. This attracted a lot of attention and served to highlight that attacks on medical personnel, facilities and vehicles are crimes with grave humanitarian consequences. Photo: Australian Red Cross/Louise Cooper

We continued to engage with Movement partners in global efforts towards eliminating nuclear weapons, in our common belief that their use is incompatible with the rules of IHL. The humanitarian consequences of the use of these weapons are unacceptable, and the capacity of the Movement to respond in such an event would be limited due to the level of destruction caused.

In the second half of 2013, we used social media to gain further exposure for our ‘Make Nuclear Weapons the Target’ campaign, calling on people around the world to share videos and photographs of ‘things they love, so we don’t forget what’s at stake’. Delegates viewed these submissions at the November 2013 Statutory Meetings of the Red Cross and Red Crescent Movement before the passing of an historic Four Year Plan of Action to implement a 2011 Council of Delegates Resolution, which calls on states to work towards a ban on the use of nuclear weapons.

By sending high-level representatives to the second governmental conference on the humanitarian impacts of nuclear weapons in Mexico, as well as a Red Cross Movement meeting in The Hague on our global nuclear weapons advocacy strategy, we continued to secure our place as an influential advocate against the use of nuclear weapons. We will continue to call for an international agreement to ban their use.

Reaching beyond borders →
← Relief in emergencies