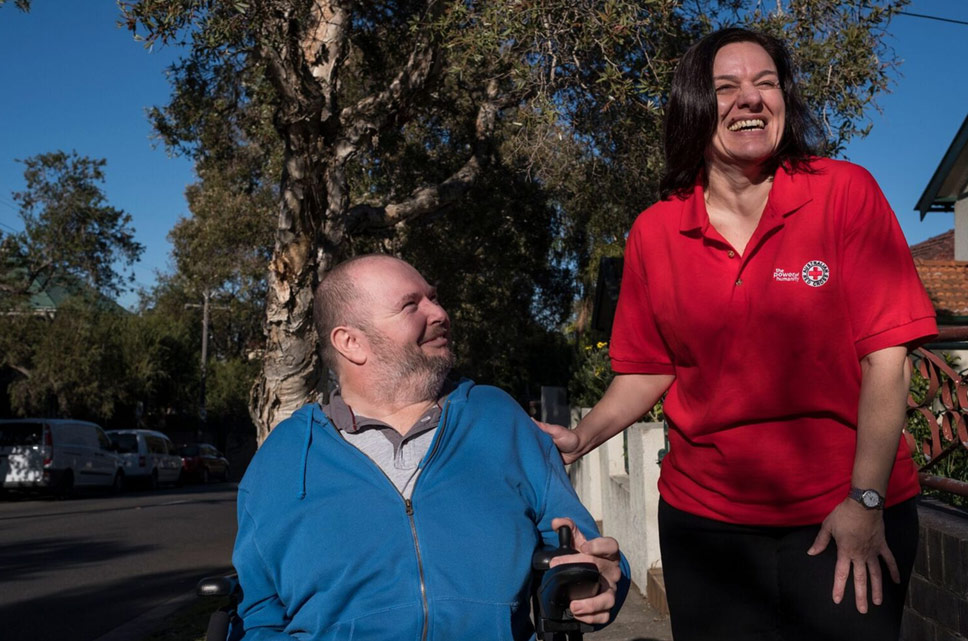 At Red Cross, we believe everyone deserves equal opportunities, no matter their circumstances. We assist individuals living with a disability, injury or health condition to find employment. Australian Red Cross/Conor Ashleigh

Under this goal, we have set the following 2020 outcomes:

One of our longest-running and most iconic fundraising campaigns, Red Cross Calling, had a successful year, raising $1.7 million, an increase of nearly $350,000 compared with 2016, and double the number of registered fundraisers.
The campaign was designed to attract new supporters, grow digital fundraising and introduce a sustainable income stream. Initiatives included a pilot that encouraged Australians to walk in the shoes of others and raise funds online.

This year we launched the Pass it On campaign which asked people what they would like to pass on to the next generation. They highlighted: financial security for their families; a better world for their grandchildren and great grandchildren; and the chance of a future for those less fortunate.

As part of the program, 138 of our donors and supporters attended two events where Red Cross ambassadors and aid workers shared their stories and experiences. Five Wills Days were held across Victoria and Western Australia along with multiple referrals to our national solicitor network.

We received about $12.6 million from generous supporters who left us a gift in their Will.

We are grateful for the ongoing support of our network of solicitors who give their time to the program and we thank the 544 people who have confirmed they are leaving a gift to us in their Will.

The Australian Red Cross Society of Women Leaders provided tens of thousands of dollars worth of in-kind and sponsorship support through their networks, guaranteeing that no donations were spent on event costs. We thank Founding Chair Kimberly Gire and co-founders Lorraine Tarabay and Linda Martin for their philanthropic leadership and service during the first three years of this unique fundraising and engagement program.

Ultra-athlete Debi Hazelden completed the Iron Century - 100 triathlons in 100 days - to raise money for our disaster relief efforts, breaking a world record along the way. Debi and her husband John Mergler, who did double the distance on most days, raised $37,322 through their incredible efforts.

Debi was living in Christchurch when it was devastated by the 2011 earthquake and saw first-hand what we do for people in disasters. She was so impressed she dedicated her record-breaking run, swim, ride to Red Cross, with the Iron Century fundraiser attracting community and media attention.

More than 10,000 individuals and groups fundraised within their communities in support of our programs.

Support from trusts, foundations and private ancillary funds totalled $3.3 million, a 38% increase on the previous year.

A highlight was securing a two-year contract valued at more than $980,000 with the Department of Social Services to provide transport services and assistance with care and housing across South Australia, Victoria and Western Australia.

In recognition of a rapidly changing funding landscape, we will explore new forms of partnerships that involve different market segments, such as Public Private Partnerships, Social Impact Investing and Creation of Shared Value.

Overall, our Commercial Operations contributed a net $1.7 million in diversified funding to support our humanitarian work.

We delivered first aid training, including mental health and other related courses, to more than 50,000 students. Councils expressed major interest in our defibrillator machines, distributing them to sporting clubs. We introduced emergency response and volunteering awareness to our training presentations to increase the reach of key Red Cross messaging.

The number of volunteers contributing to our retail division grew by 500 people to more than 5,500.

While our network grew, competition for quality donations remains a challenge for charity retailers. Potential donors are selling better quality items online and the increase in fast fashion has resulted in poorer quality donations, often unable to be re-sold.

Sourcing high-quality, new goods counteracts this trend and we strengthened our partnerships with Country Road and Super Retail Group. We also secured agreements with national and international fashion retailers, resulting in our largest single donation of new goods.

Such initiatives translated into a record year of sales, with growth of 9.6% contributing more than $5 million in funding to our humanitarian efforts.

Ride-sharing network Uber partnered with us for another successful donation drive with 2,500 bags of clothing picked up from across the country and dropped off to our shops. The collection generated saleable clothing donations worth more than an estimated $500,000.

Setting Transparency and 80 cents† in every dollar objectives has ensured that we focus on the best balance between allocating as much as we can to achieve outcomes whilst recognising we need the right level of indirect support to ensure those outcomes are effective.

We are continually looking for more efficient ways to operate, to develop more effective supporter experiences and invest in cost effective digital solutions.

← Goal 4: Improve the wellbeing of those experien... Goal 6: Provision of a safe, secure and cost ef... →
From the President and CEO Who we are and how we help Our strategic plan Strategy 2020 Delivering real impact Goal 1: Build an inclusive, diverse and active humanitarian movement based on voluntary service Goal 2: Save lives, build resilient communities and support people in disasters Goal 3: Prevent and alleviate human suffering in times of war and conflict and promote non violence and peace Goal 4: Improve the wellbeing of those experiencing extreme vulnerability Goal 5: Maintain a strong, innovative, sustainable and accountable organisation capable of achieving our humanitarian goals Goal 6: Provision of a safe, secure and cost effective supply of blood and related products Red Cross people Our financial supporters Partnerships Being safe, ethical and sustainable