Goal 3: Prevent and alleviate human suffering in times of war and conflict and promote non violence and peace

This year saw the continuation of alarming trends in global armed conflict. Destruction of hospitals and medical facilities was prevalent, battles were fought close to civilian populations, cultural world heritage sites were destroyed, and humanitarian organisations’ access to affected people was interrupted. The rules of international humanitarian law (IHL) address these issues and we continued our mission to champion this body of laws, in an effort to reduce the impacts of war.

Here in Australia, we became increasingly involved in building understanding and support for the humanitarian needs of asylum seekers, refugees and other vulnerable migrants. In many cases we increased our contribution to the Red Cross Red Crescent movement’s efforts to address the needs of the largest number of people on the move since the Second World War, and we embarked on a number of initiatives to encourage a more compassionate and welcoming society in Australia.

Promoting the laws of war

We promoted respect for and compliance with IHL through discussions with defence forces, governments, humanitarian organisations and businesses working in conflict zones.

This year we hosted the fourth Commonwealth Conference on IHL with the Australian Government and the International Committee of the Red Cross, a valuable opportunity to discuss IHL challenges and opportunities with Red Cross and government attendees from 35 countries. With our partner Red Cross societies in the Pacific, we also launched national handbooks on IHL for parliamentarians in Vanuatu and Tonga, helping to further disseminate understanding of these vital laws. At the 2015 International Conference of the Red Cross Red Crescent Movement, we made a number of pledges alongside the Australian Government to strengthen implementation of IHL and protect vulnerable people in our region.

Our engagement with the Australian Defence Force (ADF) continued with participation in Talisman Sabre, a major exercise between the Australian and US militaries involving more than 30,000 defence personnel. We also provided training to more than 200 ADF medical personnel and chaplains, helping them to understand their rights and obligations under IHL.

As part of the international Red Cross Red Crescent movement we advocated for a dedicated compliance mechanism to reduce the impact of armed conflict on civilians; however it was disappointing that a landmark resolution on this failed to pass at our 2015 international conference. We also continued our work advocating for a binding treaty to ban the use of nuclear weapons, with the view that their catastrophic effects cannot be compatible with IHL regulations. 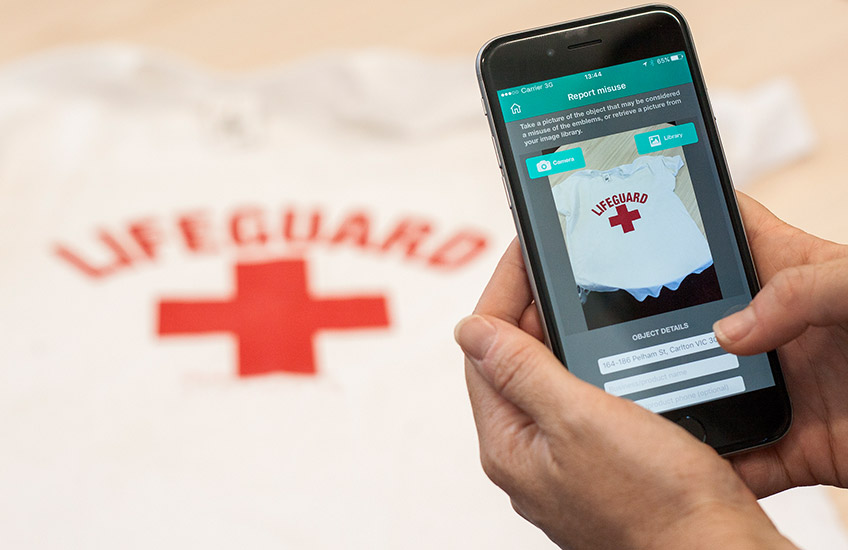 The red cross emblem shouldn't be used like this! Our supporters can now use The Emblem app on their mobile devices to quickly capture instances of misuse and forward them to our team.
Australian Red Cross/Adam Corcoran

Protecting our emblems: there’s an app for that!

Many people don’t know the significance of the red cross and red crescent emblems, which are protected by Australian and international law and mean ‘don’t shoot!’. One of our major duties is to protect the emblems and guard them from misuse so that their life-saving meaning can continue to be understood in times of conflict. This year we launched an innovative new app to educate people about the protective significance of the emblems, and allow them to report emblem misuses to our staff. Once we receive a report, we open a dialogue with businesses found to be misusing the emblem and constructively support them to change their behaviour. A world first, The Emblem app is now available to other Red Cross and Red Crescent societies for their own adaptation and use.

Help us protect the emblems that protect lives. Download The Emblem from the App Store or find out more at redcross.org.au/theemblemapp

The humanitarian suffering caused by armed conflict rose to unprecedented levels this year, with more than 50 million people displaced. While consistently avoiding engagement in political debates, we increased our public advocacy for the humanitarian needs of vulnerable migrants.

We partnered with SBS in promoting their latest season of Go Back To Where You Came From, with Red Cross ambassadors Dr Munjed Al Muderis and Abdi Aden sharing their refugee stories at series launches in Sydney and Melbourne. These events were attended by hundreds and shared with thousands on social media. Thousands of education packs were provided to primary and high school teachers in connection with the program, supporting them to share the facts about seeking asylum with their students.

Other campaigns to improve community understanding of refugees and asylum seekers included the development of a series of resources detailing how individuals, businesses and schools can help newly arrived migrants in their communities. During Refugee Week we highlighted the positive contributions migrants make to Australia, particularly in regional areas.

We continued to expand our In Search of Safety community education program. Through the program we deliver interactive workshops in schools, workplaces and community groups, allowing participants to speak with someone who came to Australia seeking refuge. Starting in WA and Victoria, the program now runs in the ACT, Tasmania and Queensland, and we will roll it out nationally in the coming year.

Red Cross volunteer Sarmed Yassin came to Australia as a refugee when he was a child. He's now a youth community leader in Shepparton, Victoria, and volunteers with our In Search of Safety program.
Australian Red Cross/Lara Cole

We are currently restructuring our international humanitarian law program to better serve our Strategy 2020 goals and adapt to a changing environment. An independent external evaluation of the program found that our activities continue to be relevant and effective, but we are acting on a number of identified opportunities for strengthening strategic engagement. This will be essential to achieve our goal of supporting all Australian organisations in conflict zones to develop an IHL action plan.

More than 10,200 people learned about international humanitarian law through our training events

← Goal 2: Save lives, build resilient communities... Goal 4: Improve the wellbeing of those experien... →
From the President and CEO Who we are and how we help People helping people Our strategic plan Goal 1: Build an inclusive, diverse and active humanitarian movement based on voluntary service Goal 2: Save lives, build resilient communities and support people in disasters Goal 3: Prevent and alleviate human suffering in times of war and conflict and promote non violence and peace Goal 4: Improve the wellbeing of those experiencing extreme vulnerability Goal 5: Maintain a strong, innovative, sustainable and accountable organisation capable of achieving our humanitarian goals Goal 6: Provision of a safe, secure and cost effective supply of blood and related products Red Cross people Our financial supporters Government supporters and corporate partners