These are some of the people we helped... 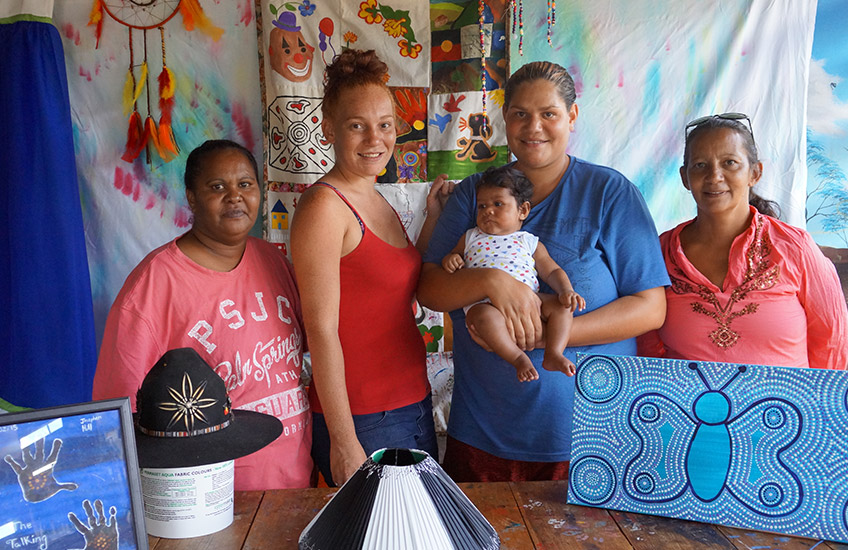 In the remote Queensland Aboriginal community of Woorabinda we run a women’s and children’s centre. Known as Gumbi Gunya, it’s long been a safe place for women and their children to meet up and support one another. Young mothers can also join in a mums and bubs group at the centre. Women like Pamela, Cindy, Bronwyn and Janelle (pictured with baby Raymond) join in on painting, storytelling and learning more about culture from their mothers and grandmothers – sharing problems and supporting each other in resolving them. The aim is to promote safe and healthy relationships in the community.
Photo: Australian Red Cross/Chloe Brant

86-year-old Jacki may be almost completely vision-impaired, but that's not keeping her from living an independent life in the home and garden that are so dear to her. With help from a Red Cross volunteer phoning every morning to check she's OK, Jacki says little things like age and vision impairment aren't going to keep her from the life she chooses. Each year 3,700 Red Cross volunteers call more than 6,800 people who live alone and are at risk of an accident or sudden illness that could go unnoticed.
Photo: Australian Red Cross/Susan Cullinan 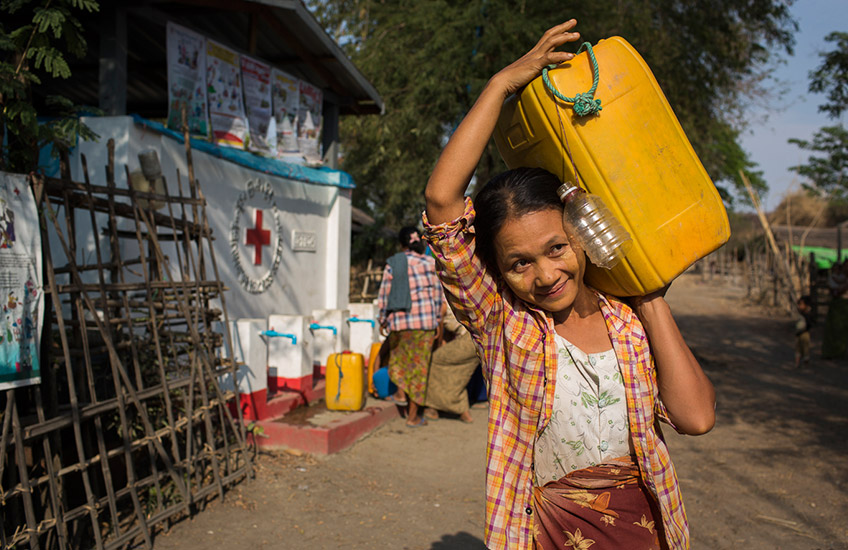 Before Red Cross began working in Thae Pyu village in Myanmar, families had to walk at least 30 minutes to the creek to collect water. Now they simply have to cross the street to a convenient water point. It’s having a profound impact on women, who now have more time to pursue their interests and small business pursuits, and less health worries for their families. In Myanmar, we are helping over 22,000 people across 35 villages in Magway and Kayin to find practical solutions to common health problems, from first aid to safe water and village-managed health schemes.
Photo: Australian Red Cross/Conor Ashleigh

…and some of those who made it happen

Tara (pictured above) was greeted by Red Cross staff members at Adelaide airport seven months after fleeing Iran. She never guessed that one day she'd be working alongside them. Our caseworker Cindy (on the left) helped Tara and her family find their feet in a new country. It was Cindy's advice to study English and social work, combined with a lot of grit and determination, which led Tara down the path of working for Red Cross. Now Tara is a caseworker too, helping other vulnerable migrants to find their place in Australia.
Photo: Australian Red Cross/Daniel Carter

James is a volunteer at our Cairns Wellbeing Centre, one of a number of Red Cross wellbeing facilities adjacent to hospitals throughout Queensland. It's a safe and welcoming place to stay for people from regional areas who need to access health services in the city, and people like James make sure there's always someone supportive to talk to and activities to get involved in. James knows how important the centre is because he was once a resident. Diagnosed at 40 with a range of health issues including kidney disease and heart problems, he checked into the wellbeing centre to get much-needed support while he sought medical treatment nearby. Now 48 and healthy, he's turned his life around and is helping others to do the same.

Previous Next
← Who we are and how we help Our strategic plan →
From the President and CEO Who we are and how we help People helping people Our strategic plan Goal 1: Build an inclusive, diverse and active humanitarian movement based on voluntary service Goal 2: Save lives, build resilient communities and support people in disasters Goal 3: Prevent and alleviate human suffering in times of war and conflict and promote non violence and peace Goal 4: Improve the wellbeing of those experiencing extreme vulnerability Goal 5: Maintain a strong, innovative, sustainable and accountable organisation capable of achieving our humanitarian goals Goal 6: Provision of a safe, secure and cost effective supply of blood and related products Red Cross people Our financial supporters Government supporters and corporate partners