From the President and CEO

Michael Legge and Judy Slatyer share some of their highlights from the 2015/2016 financial year.

We both feel privileged to be leading Red Cross into the next stage of its long, important story. Here are some of our highlights from a productive year – just a small sample of the amazing work our people do every day.

We both feel privileged to be leading Red Cross into the next stage of its long, important story. Here are some of our highlights from a productive year – just a small sample of the amazing work our people do every day.

Responding to disasters near and far

Summer is always a busy time at Red Cross, and this year our volunteers and staff helped around 13,000 people who had been affected by emergencies.

A school-based preparedness program continued to show children how to be more resilient against emergencies, and both of us were honoured to see the program awarded in the Resilient Australia Awards both nationally and in WA. When disaster strikes, Red Cross makes sure to remain in impacted communities to support people as they recover, and it was great to see our recovery work recognised in both the NSW and ACT Resilient Australia Awards.

We continue to be vigilant against international disasters, with the sad knowledge that three out of five people affected by disasters in 2015 were in the Asia-Pacific region. Australian Red Cross responded to several international emergencies such as Cyclone Winston in Fiji, empowered by the support of our generous donors. We continued working with our regional partners to lessen the devastating impact of emergencies, winning an Australian Government Pacific Humanitarian Challenge award for a project proposal to increase the speed and effectiveness of disaster relief in the Pacific. The project, which we hope to launch soon, works by building partnerships between humanitarian agencies and local suppliers of goods and services, with the help of a custom-built digital platform.

Standing up for a humanitarian world

It was another dark year for the people of Syria, where we were disturbed to witness continuing disrespect for the laws of war.

Both Judy and our Director of International Humanitarian Law, Phoebe Wynn-Pope appeared in the media calling for greater respect for these vital laws. Australian Red Cross continued working with the global Red Cross Red Crescent movement to provide relief, with the support of the Australian public who gave $1.4 million to our ongoing Syria Crisis Appeal.

It was fantastic to welcome attendees from 35 countries to the fourth Commonwealth Conference on International Humanitarian Law, which we hosted together with the Australian Government and International Committee of the Red Cross. Michael and several senior colleagues also attended the 2015 International Conference of the Red Cross Red Crescent Movement held in Geneva, where we made a number of pledges alongside the Australian Government to strengthen the laws of war and protect vulnerable people.

We were proud to raise our voices in campaigning for justice reinvestment. Our #justicereinvest campaign asks that some of the billions spent on Australian prisons be redirected to address the underlying causes of crime and help people impacted by disadvantage. In March 2016, Australian Red Cross: A year in review 2015/2016 3 Red Cross published Vulnerability Report: Rethinking Justice, a research publication which supports us as we advocate for a better and more humanitarian approach to justice in Australia.

We continued to support the humanitarian needs of migrants, who we believe are one of the most misunderstood and discriminated-against groups in Australia. Red Cross provided emergency relief grants and support services for people seeking asylum and living in the community; monitored conditions in immigration detention facilities; and supported those who had experienced trafficking or forced marriage. We came across some truly touching stories through our international tracing program, where staff and volunteers work tirelessly to trace people separated from their loved ones by conflict or disaster.

We’re committed to long-term work to address community-determined needs in places like remote Woorabinda, Queensland, where Red Cross was recognised as a finalist in the 2016 Queensland Government Reconciliation Awards. Our place-based programs look a little different in each place we work, but they can include anything from teaching nutrition skills to supporting learner drivers to get their licence – whatever works for that particular community.

When Judy commenced as CEO in February 2016, we took the opportunity to revise our organisational strategy and embrace ways of strengthening our goals.

We wrapped up the year with the introduction of 22 measurable targets that are now part of our Strategy 2020. With these targets at the forefront, we will be approaching our work over the next four years with a renewed sense of focus.

All thanks to you

Of course, none of this would be possible at all without each and every one of you who support Red Cross’ work.

Both of us extend our heartfelt thanks to everyone who joined Red Cross this year to help people near and far – because we couldn’t have done any of this without your support. 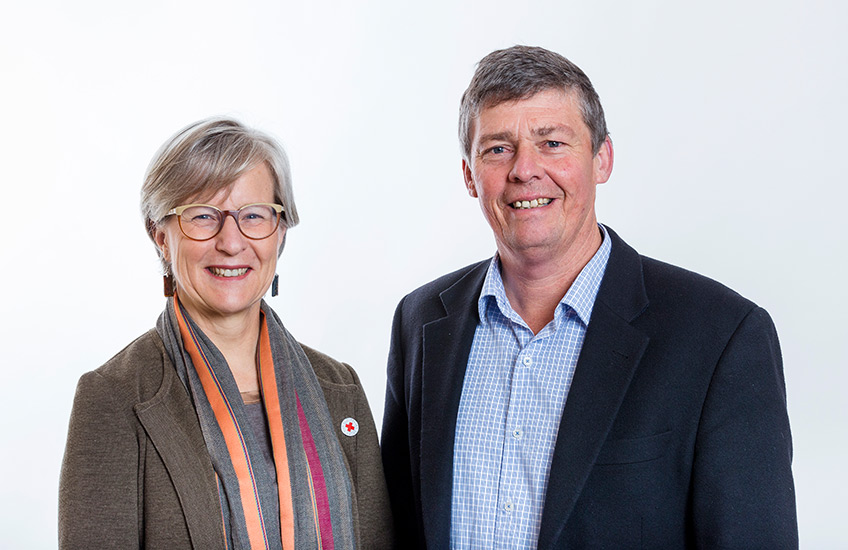 Who we are and how we help →
From the President and CEO Who we are and how we help People helping people Our strategic plan Goal 1: Build an inclusive, diverse and active humanitarian movement based on voluntary service Goal 2: Save lives, build resilient communities and support people in disasters Goal 3: Prevent and alleviate human suffering in times of war and conflict and promote non violence and peace Goal 4: Improve the wellbeing of those experiencing extreme vulnerability Goal 5: Maintain a strong, innovative, sustainable and accountable organisation capable of achieving our humanitarian goals Goal 6: Provision of a safe, secure and cost effective supply of blood and related products Red Cross people Our financial supporters Government supporters and corporate partners