As we marked our Centenary, we recognised the generations of Australians who built our proud legacy and thanked the one million Red Cross members, volunteers, donors, staff, blood donors and supporters who make such a positive, lasting difference to the lives of people in need every day. 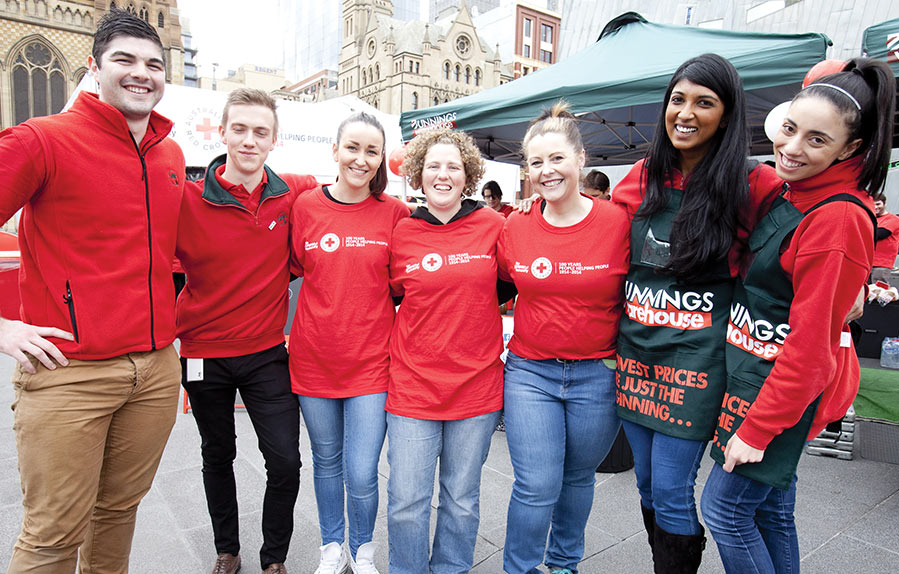 In August, more than 3,000 Red Cross volunteers teamed up with Bunnings employees to host a nationwide Red Cross Centenary BBQ in 248 locations across Australia. We raised $455,000 and reached out to the Australian public to build support for the years ahead. 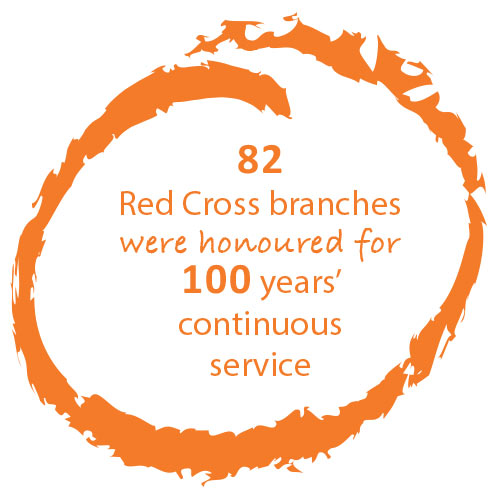 Honorary life member Elizabeth Nissen proudly collects a certificate on behalf of the Brighton Branch in Victoria that was awarded for 100 years of continuous service during our Foundation Day celebrations at Victorian Government House. Elizabeth, now 97, has volunteered with Red Cross for more than 80 years.
Australian Red Cross/Vincent Verdet

The Governor General Sir Peter Cosgrove officially launched our Centenary book The Power of Humanity: 100 years of Red Cross in Australia at Government House, Canberra. Author and Red Cross Ambassador, Professor Melanie Oppenheimer outlined the unique role of Red Cross over a century, emphasising how women have shaped our organisation. Our then-CEO Robert Tickner thanked the countless people who have upheld our enduring humanitarian values, adapting and responding to changing community needs.

Hundreds of loyal Red Cross people joined the 100th birthday celebration on 13 August, back where it all began at Melbourne’s Government House. Just nine days after the outbreak of World War One, the wife of the Governor-General, Lady Helen Munro Ferguson founded Red Cross in Australia and transformed the ballroom of her residence into Red Cross headquarters for the duration of the Great War.

Around the country Red Cross members and volunteers held hundreds of local events, exhibits and displays to showcase a century of grassroots humanitarian action. This proud history was captured on our Centenary website, along with the personal stories of more than 800 people, to form a digital time capsule for future generations to enjoy.

In October, we donated our national archives to the University of Melbourne Archives to be preserved and shared with future generations, a five year process to handover, catalogue, curate and digitise 100 years of photographs, records and treasured objects.

The year culminated in a national Centenary Summit, bringing more than 500 Red Cross people from around Australia to Melbourne to plan for our future.

Our leaders shared their vision for a powerful world where each Red Cross person acts as a strong link in the universal chain of humanity, always there at the ready to meet humanitarian demands wherever they arise, while preserving the dignity of those we help.

More than just a celebration, our Centenary challenged and inspired members, volunteers and staff to build a strong Red Cross to pass on to the next generation.

“It is amazing, up to 95% of the membership were women, almost one in seven Australians… Red Cross was part of a local grassroots community of people helping people and was part and parcel of the fabric of Australian life.” - Professor Melanie Oppenheimer

← Who we are and how we help Building bridges into the community →
From the President and CEO A spotlight on 2014/2015 Our strategy Who we are and how we help Celebrating our Centenary: 100 years of people helping people Building bridges into the community Partnering with Aboriginal and Torres Strait Islander peoples Breaking the cycle of disadvantage Supporting vulnerable migrants Relief in emergencies Promoting the laws of war Reaching beyond borders Saving lives Safer workplaces, resilient communities Shop for good + Our people and supporters Members Volunteers Young humanitarians Staff Blood donors International volunteers Aid workers Regular monthly donors Bequestors Individual donors Community fundraisers Trusts, foundations and private ancillary funds Philanthropists Ambassadors Partnering with government Corporate partners Workplace giving This year's awards Thank you to our government supporters and partner organisations How we engage our supporters