Where the money came from (Humanitarian Services) 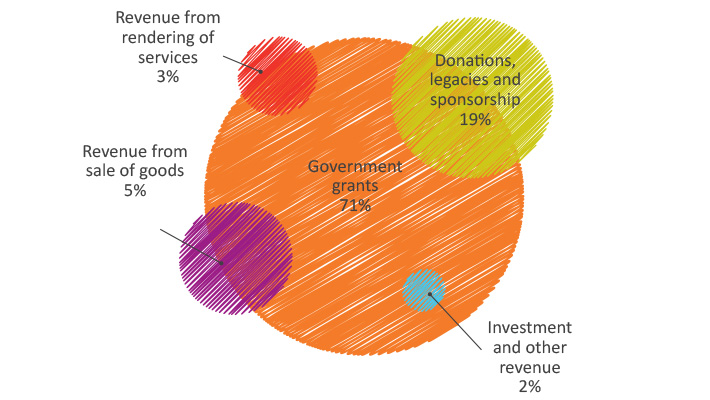 Income for Humanitarian Services increased 17% this year to $526.8 million, reflecting the growing levels of funding for our humanitarian work from both the Australian public (Community Support) and from federal, state and local governments. We also continued to receive significant non financial support from over 31,000 Red Cross volunteers, as well as gifts in-kind and pro bono contributions from corporate partners.

Government grants of $375.8 million for Humanitarian Services remain our largest source of income, up from 2012/2013.

Red Cross depends on the financial generosity of our community supporters, without whom we could not provide our vital everyday work here in Australia and overseas. Our centenary year saw this grow $9.4 million to $85 million (12% increase), with Community Support accounting for almost one in every five dollars of our funding.

Individuals giving a regular monthly gift continue to be the largest source of Community Support for our everyday work, with regular givers donating $37.3 million, up 25% ($7 million) year on year. There was also substantial growth in income from individual giving and Corporate Partnerships.

Another essential source of Community Support are those generous Australians who leave a gift in their Will, with $15.6 million received in 2014 from 267 bequests. One bequest was from a lady whose association with Red Cross started during WWII as a Field Officer supporting the sick and injured overseas, and demonstrates the lifelong commitment of giving from many of our supporters.

The ongoing appeal in support of people and communities affected by the Syrian crisis and an appeal for Typhoon Haiyan in the Philippines (one of the strongest tropical cyclones ever recorded, killing over 6,300), raised a combined $14.4 million from the Australian public. 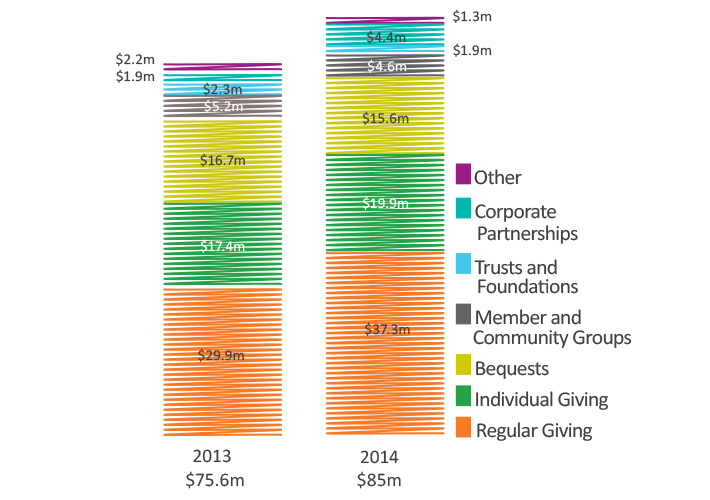 Of the $375.8 million government funding (excluding the Blood Service) received in 2014, the majority ($362.8 million) was for contracted services in areas of need, with grants of a commercial nature worth $13 million for training, employment and disability services.

Income for Migration Support programs increased by more than $71 million, as a result of increasing numbers of asylum seekers requiring assistance within the community. Migration support continues to be our largest source of funding at $279.1 million, accounting for almost three quarters of the government grants received. Our Social Inclusion work also received increased funding year on year.

Government funding was secured via competitive tenders, grants and direct approaches to government. All funding from government must meet conditions over the term of each agreement and is subject to regular review to reaffirm ongoing value to the community. 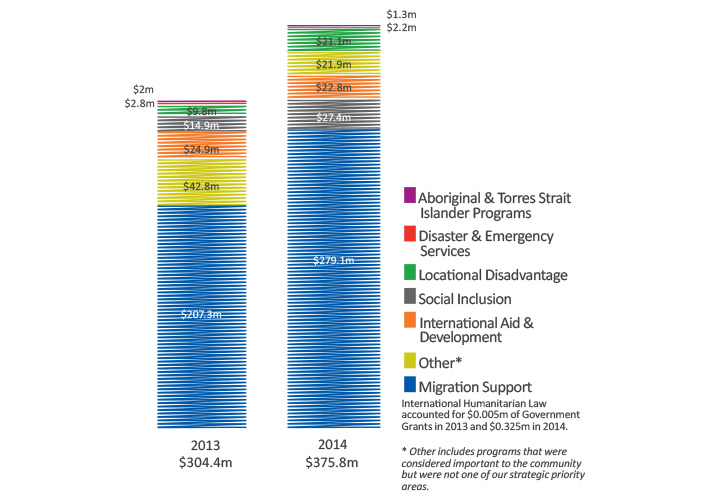 Where the money was spent →
← Our financials