Our people, our supporters 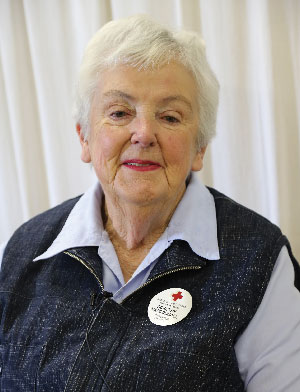 Dorothy MacDougall joined Junior Red Cross when she was just nine years old. Her mother was a Red Cross volunteer through two world wars and she admired how the Red Cross women helped care for people. Today Dorothy is a proud member of the Springwood Branch in NSW where she has also volunteered for 24 years, dedicating her time checking on the wellbeing of vulnerable and isolated Australians, and providing personal support after two major bushfires. Dorothy is one of more than 18,000 Red Cross members across Australia and also part of the one in four members who are also registered volunteers.

Branch and club members represent approximately 75 per cent of our member base, spread across more than 650 branches and clubs around Australia. Fundraising efforts from members contributed well over $4 million this year. Our independent (non-branch) members are also a crucial part of our community support base. In particular, there has been a marked increase in the number of youth members this year, many of whom are part of Red Cross University Clubs. Overall, there were more than 2,500 new members and Red Cross is focused on supporting and engaging existing members while continuing to grow the level of new members over the coming year.

Volunteer →
← Our people, our supporters