Whether providing safe drinking water or preparing for an earthquake, Red Cross helps people in our region to live safer and healthier lives. 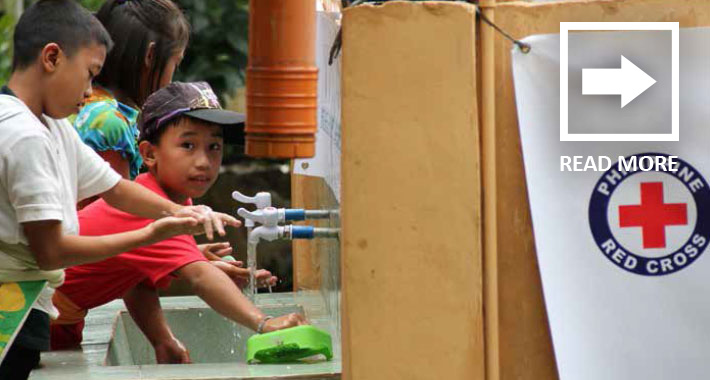 Incidences of diarrhoea among Filipino school children in Pangasinan and La Union decreased by more than 50% after Red Cross installed new toilets and drinking facilities, and helped students understand the importance of hygiene and hand washing. Australian Red Cross/Phil Brown.

In 2012/2013, Red Cross supported more than 50 individual programs that worked with communities in Asia, the Pacific and Africa. These programs aimed to reduce the risk from emergencies and natural disasters to vulnerable groups, improve access to life-saving water and sanitation, and support the provision of health services to women and children. Five international program evaluations were conducted this year, with three in Cambodia, one in Vietnam and one in Papua New Guinea. What we learn from these major evaluations will inform future program development.

In March 2013, we brought together leaders from 13 National Red Cross Societies in Asia to learn from each other and strengthen leadership and program management. We also coordinated a regional partnership of Red Cross Societies in the Pacific, which has strengthened disaster management plans and resulted in pre-positioned relief supplies across the region. AusAID, the Australian Government’s overseas aid program, provided significant support for Red Cross’ work around the world this year. 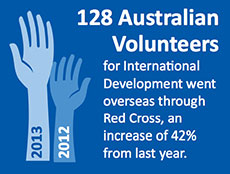 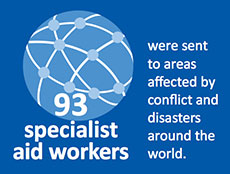 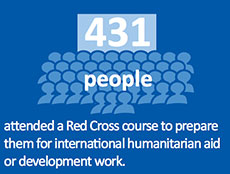 Disability and opportunity in Cambodia

This year saw the completion of a three-year program to improve the quality of life for people with disabilities in Cambodia, by providing 38 specialist disability support services with funding, equipment, training and opportunities for collaboration.

Through the program, 2,681 people received wheelchairs and more than 6,000 received other assistive devices. There were 1,235 families who accessed small grants or micro-loans to support themselves, 1,672 people who participated in job skills training and 6,810 children who received support with their education. More than 34,000 physiotherapy sessions were provided to clients and 2,768 people were referred to hospitals for surgery or medical treatment.

An evaluation of this program, along with the Community Based Health Development Program and the Youth and Road Safety Program, found that Red Cross support had improved organisational capacity of local Cambodian partners to manage and deliver program outputs at the grassroots level. Improvements at the community level included safer health practices, improved access to water and sanitation and increased road safety awareness for targeted groups.

An independent evaluation of a Red Cross project on water, sanitation and organisational development in Northern Vietnam found that it had improved the living conditions of its 36,500 beneficiaries. In particular, the Community Based Healthcare and Branch Development Program reduced the prevalence of water-borne diseases by 22.1% in the targeted four provinces. The evaluation also found that the project had addressed the most pressing needs of the targeted communities, and had reached almost 10,000 more beneficiaries than originally expected. Two areas however still require attention: the long term sustainability of project outcomes by strengthening local skills and capacity to deliver and sustaining the behaviour change in hygiene practices.

On the island of Ambrym in Vanuatu, the arrival of the dry season means some villages run out of safe drinking water.Red Cross helped West Ambrym communities to install and maintain 22 rainwater tanks, ensuring a safe supply of water all year round. Local volunteers built 119 ventilated pit toilets and trained their communities in simple hygiene behaviours such as washing hands with soap, greatly reducing the spread of water-borne diseases in their homes and villages.

Civil unrest and violence has been ongoing in Syria since March 2011 and today, more than eight million Syrians are currently in need of daily humanitarian assistance.
This year, the Syrian Arab Red Crescent and other organisations provided emergency health care, clothing, water and shelter to more than two million people each month. We are supporting their work through an ongoing appeal which has raised more than $188,000 this year.
A further contribution of $1.9 million from AusAID is helping Syrian refugees in Lebanon, Iraq and Jordan to re-establish their lives with cash grants for their rent and food, as well as household items and basic health services.