Wars have limits. Globally, Red Cross has a mandate to promote an understanding of, and respect for, international humanitarian law in times of peace and armed conflict. 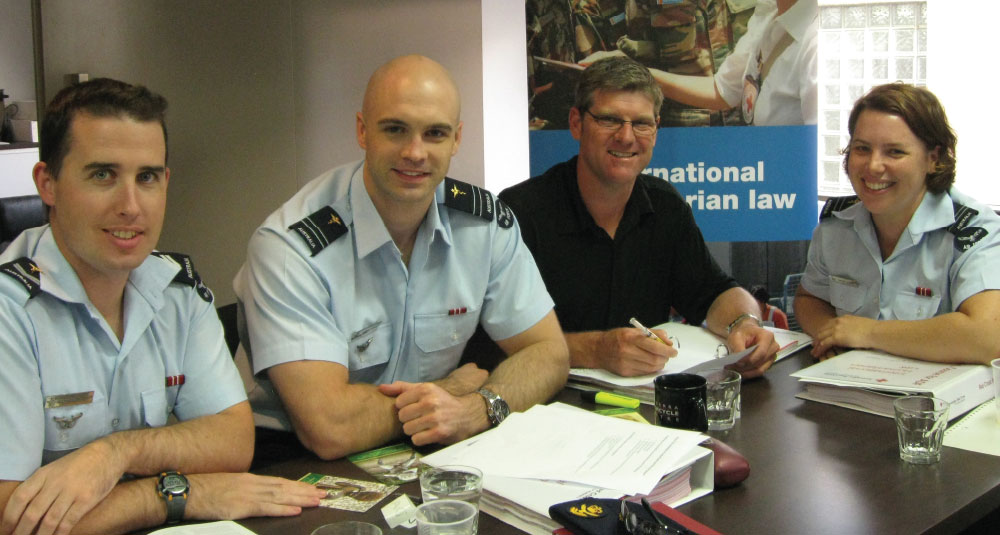 Members of the Australian Defence Force attended a four-day Red Cross IHL course in Brisbane in March 2013, which provided comprehensive instruction on international humanitarian law. The course has been conducted bi-annually since 1991 and is attended by representatives from the Army, Navy and Air Force. Australian Red Cross/Katrina Elliot.

Two editions of the International Humanitarian Law Magazine were published this year: the first focusing on ‘Weapons of War’ and the second, produced with the support of AusAID, on the topic of ‘Health Care in Danger’.

In April 2013, Red Cross welcomed the agreement of a new international Arms Trade Treaty by the international community, which regulates the international trade in weapons from handguns to attack helicopters, and missile launchers to automatic weapons. The treaty is a vital step towards combating the humanitarian impact of armed conflict and helping to save the lives of vulnerable people.

CEO Robert Tickner explains at a governmental conference in Norway that Red Cross, the United Nations, governments and NGOs would today be “ineffective and powerless to provide any effective humanitarian response in the event of a nuclear attack as most weapons are now massively more destructive than the Hiroshima bomb”. Norwegian Red Cross.

Towards the elimination of nuclear weapons

In November 2012, President Michael Legge, CEO Robert Tickner and Head of International Law and Principles Dr Helen Durham attended an International Red Cross and Red Crescent Movement meeting in Vienna. Their purpose was to advance the implementation of the historic resolution aimed at banning the use of nuclear weapons, a resolution which was passed at the 2011 Council of Delegates meeting in Geneva. In March 2013, Robert spoke on behalf of the International Federation at the first-ever governmental conference on the humanitarian impacts of nuclear weapons, addressing governments from 132 countries. Robert also co-chaired a Movement meeting in Hiroshima in May 2013, held to further progress action towards the elimination of nuclear weapons.

In April 2013, Red Cross established Emblem Awareness Month to generate public awareness of the use of the red cross, crescent and crystal emblems as symbols of protection during armed conflict. As part of this campaign, a video was produced by Red Cross with the assistance of the Australian Defence Force, and it has been widely circulated through social media including Facebook, Twitter and YouTube. The total reach of the emblem awareness campaign on Facebook at 30 June was 201,600 people, including 16,900 clicks and more than 7,000 likes, shares and comments.

Red Cross co-hosted a conference on the elimination of nuclear weapons in Adelaide on 3 and 4 November 2012, in conjunction with Flinders University and supported by the Bob Hawke Prime Ministerial Centre at UniSA. This high profile conference drew together leading academics and experts from around the world, exploring themes such as the legality of the use of nuclear weapons, the devastating humanitarian and environmental impacts and the role of governments, advocacy groups and civil society in furthering the debate.

The keynote speaker was Judge C.G. Weeramantry, a Panel Judge on the 1996 International Court of Justice “Legality of use or threat of use of Nuclear Weapons” Advisory Opinion. The conference built on one of the aims of the 2011 resolution to ban the use of nuclear weapons: that we engage in ‘activities to raise awareness among the public, scientists, health professionals and decision-makers’.