Where the money came from 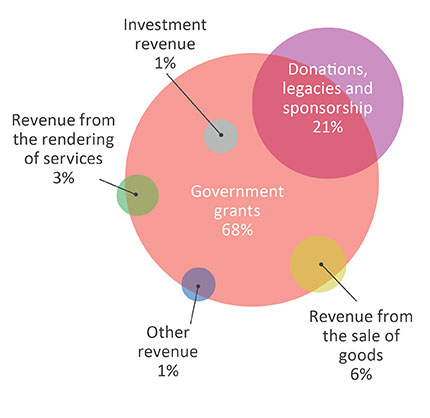 Our income for Humanitarian Services (excluding the Blood Service) increased 19% this year, from $377.4 million in 2012 to $449.2 million in 2013. Support from the Australian public (Community Support) and from the Australian Government (Government Grants) continued to be our main sources of income, forming 89% of our total income this year. We also received significant support through gifts in-kind and pro bono support from corporate partners and volunteers.

Red Cross depends on the generosity of individuals to support our work in Humanitarian Services. Funds from the community for everyday work in Australia and further afield (excluding disaster appeals) continue to grow, up 33% this year.

Grants from federal, state and territory governments were the main source of funding for Humanitarian Services, accounting for 68% of income. In 2013, Red Cross received $304.4 million of Government funding, up 30% from 2012. 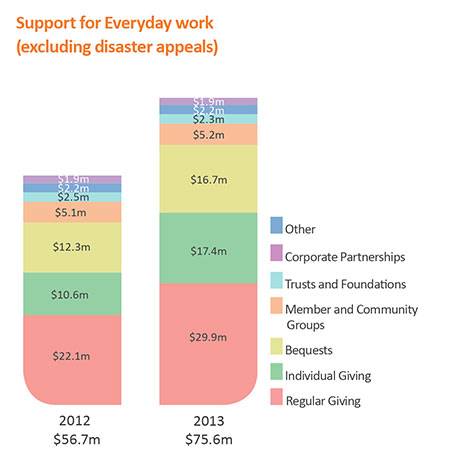 The largest source of Community Support comes from regular givers, who donate a monthly gift to Red Cross. Regular monthly giving has grown 36% year on year, providing almost $30 million to support Red Cross work. There were approximately 107,000 regular givers at the end of June 2013.

Another large source of Community Support comes from bequestors who leave a gift to Red Cross in their Will. In 2013, over $16.7 million – or one in every five fundraising dollars – came from these generous Australians.

In 2012, the Board continued to invest in promoting Regular Giving and Bequests in recognition of fundraising trends, the low cost base of these two forms of income generation, and the need to secure income into the future.

This year we launched two appeals to help Australians respond and recover from flooding in Queensland and bushfires in Tasmania. Over $20 million was raised, excluding in-kind and pro bono support.

The majority of government funding is for contracted services in identified areas of need, but also includes grants of a commercial nature for training and employment services. $222.2 million grant income was received for Migration Support and Social Inclusion, the former receiving the biggest increase in income support in 2013.

The majority of government funding was for work in migration, arising from changes to Government policy in 2012. Migration Support expanded again this year as a result of increasing numbers of asylum seekers requiring assistance in detention centres and within the community.

The increases in government funding were secured via competitive tenders, grants and direct approaches to government. All funding from government must meet conditions over the term of each agreement and are subject to regular review to reaffirm ongoing value to the community.

Where the money was spent →
← Message from the Chief Financial Officer