Even wars have laws. In times of peace and armed conflict, Red Cross has a mandate to promote understanding of, and respect for, international humanitarian law. 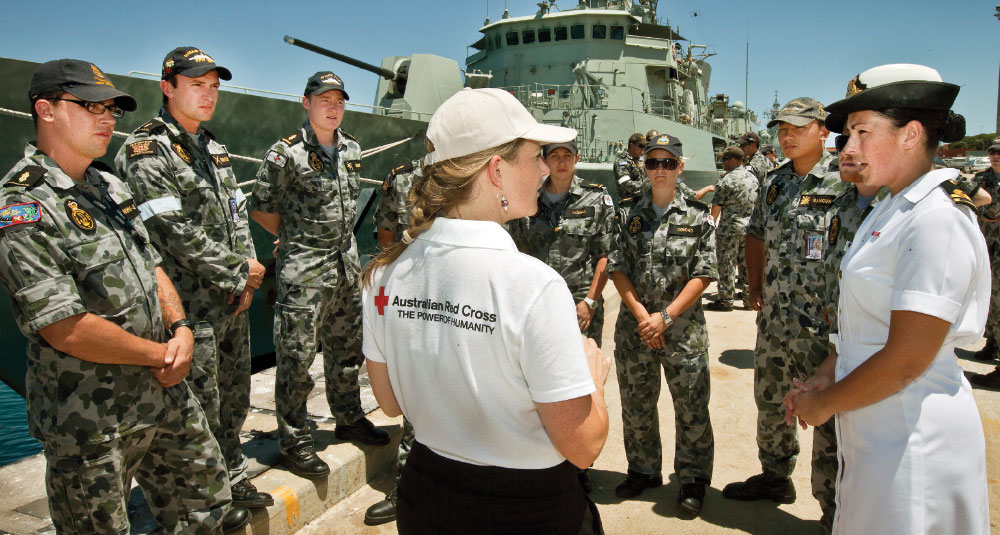 Yami Lester is a Yankunytjatjara man who grew up in Walatina, South Australia. In 1953, the UK detonated a test nuclear bomb 150 kilometres from 10-year-old Yami’s home. “A few hours after the black smoke came we all got crook, every one of us,” Yami recalls. “In 1957 I became totally blind.” Yami has been a passionate anti-nuclear weapons campaigner for decades. The Australian

The tragic 1990s Balkans conflict left 35,000 people unaccounted for. A powerful photo exhibition telling the stories of those who disappeared, and Red Cross efforts to trace family members, travelled across regional Victoria, especially to centres with high migrant populations.

At AusAID’s request the international humanitarian law team developed training for the Australian Civilian Corps, who are civilian specialists ready to be sent to overseas disasters or conflicts representing the Australian government. Courses focusing on the international legal frameworks that apply in humanitarian emergencies have had a high number of subscribers, with twenty-eight people having already attended the inaugural training in March 2012. This is a significant opportunity to work with Federal Government agencies and showcase Red Cross’ legal and training skills.

The Geneva Conventions protect the war-wounded and sick, as well as medical personnel, facilities and ambulances that assist them.

With widespread killings, abductions and attacks in conflict zones, the International Red Cross and Red Crescent Movement adopted the ‘Health Care in Danger’ campaign to raise awareness and seek solutions to these breaches of international humanitarian law. To bring these issues to the forefront, Red Cross ran a journalism student writing competition titled ‘Safeguarding health care on the front line’.

More than 13,600 Australians were trained in international humanitarian law, with 312 sessions and 74 public events.

International humanitarian law workshops were held for Red Cross staff in the Pacific from Kiribati, Micronesia, Papua New Guinea to Tonga and Vanuatu.