Addressing the impact of migration

Red Cross is committed to assisting people impacted by migration through practical support to ease the transition phase for many people new to Australia. Red Cross programs target the complex needs of migrants, reaching people affected by trafficking, people detained in immigration detention facilities as well as those who have been released into the community. Support is offered through housing, welfare and financial assistance, along with tracing services for families separated by war, conflict or disaster.

When Isha (middle) fled war-torn Somalia in 1990 she had to leave her eldest daughter, Faduma (right), behind. Isha and her family settled in Australia and, through the Red Cross international tracing service, they were reconnected and have since been able to finally reunite. “It was the happiest day,” says Isha, with daughters Faduma and Hawa. Australian Red Cross/Mourne de Klerk

Red Cross has successfully launched two new awareness raising projects as part of the Support for Trafficked People program – funded by the Commonwealth Attorney General’s Department and the Department of Families, Housing, Community Services and Indigenous Affairs (FaHCSIA). More than 600 people participated in workshops, resulting in a clearer understanding of human trafficking and how to meet the needs of people affected by trafficking.

In January 2012 Red Cross expanded emergency relief services to provide immediate assistance to asylum seekers and other migrants in transition who are not eligible for government assistance and have no other support in the community.

The former Minister for Home Affairs, the Honorable Brendan O’Connor presents Red Cross’ Francesca Pagani, National Coordinator for the Support for Trafficked People Program, with the Anti-Slavery Freedom Award on behalf of the team. Anti-Slavery Australia

2011/2012 has seen the expansion of our tracing people in detention facilities can access tracing work in immigration detention to ensure that all services to help them find missing loved ones.

Red Cross trained and supported 28 volunteers to work as Humanitarian Observers in the Immigration Detention program.

77 people affected by trafficking received support to meet their health and welfare needs.

Red Cross assisted more than 2,000 families searching for missing loved ones where separation occurred due to conflict and disaster.

Nematollah (left) travelled unaccompanied to Australia from Afghanistan when he was just a teenager. Through Red Cross, Nematollah received housing, healthcare and schooling while awaiting his visa outcome, and made new friends, like volunteer Alexander. This year Nematollah was granted a protection visa and hopes to become a police officer. Australian Red Cross/Joe Cropp

Red Cross provides support to asylum seekers, including those moving out of immigration detention facilities and into the community, through a range of programs funded by the Department of Immigration and Citizenship (DIAC).

Red Cross has been providing support for asylum seekers in the community for almost 20 years, mostly funded by the Australian Government. In 2005 the Community Detention program was developed with the Department of Immigration and Citizenship, allowing families to be cared for in the community instead of immigration detention facilities.

Since October 2010 Red Cross has been supporting the expansion of Community Detention arrangements for families, unaccompanied minors and other vulnerable individuals. This has been undertaken with the support of 20 partner organisations across the country.

In November 2011, the Australian Government announced a decision to begin releasing groups of asylum seekers from immigration detention, allowing them to live in the community while they await visa outcomes. In response, Red Cross significantly expanded its core work with asylum seekers in the community with the knowledge that community-based arrangements are far better for the health and wellbeing of people than immigration detention facilities.

Working in partnership with the Department of Immigration and Citizenship (DIAC), the government agency that is responsible for immigration status resolution, Red Cross aims to reduce harm and increase resilience for people who are made vulnerable as result of the migration process. In the last 12 months, support has increased through three important programs – the Asylum Seeker Assistance Scheme, Community Assistance Support and the Community Detention program – giving asylum seekers the chance to be supported in the community while awaiting decisions on their visa applications. 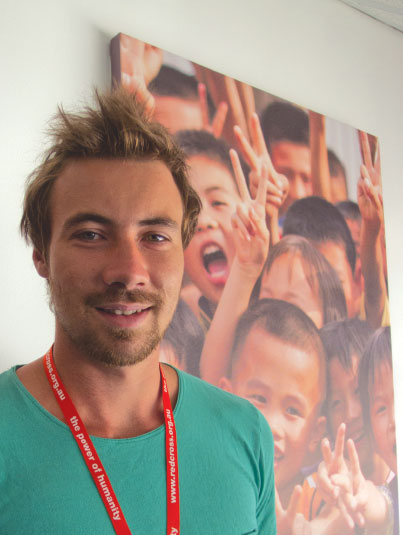 “It feels good to help,” says Sean, a Red Cross volunteer assisting asylum seekers as they move into the community. He answers their questions about Australian culture – such as football, the weather or English language. He also shows asylum seekers how to use public transport to get to the library, a doctor’s appointment or English classes. Australian Red Cross

In 2011/2012 Red Cross strengthened its role as the lead agency with 20 partner organisations, supporting families, unaccompanied minors, and other vulnerable people in the Community Detention program through access to housing, education opportunities and healthcare services.

This year the Asylum Seeker Assistance Scheme reached more asylum seekers with financial assistance to cover basic living expenses and visa processing fees. Close to 2,000 clients were supported through this program, which also extended to Tasmania and the Northern Territory where client numbers have increased.

More than 2,800 asylum seekers awaiting visa outcomes were supported through Community Assistance Support, a program that assists families and individuals requiring additional care, such as people with mental health issues and those with ongoing complex medical needs. This year also saw the expansion of Transitional Support, which provides six weeks of intensive support to eligible asylum seekers moving from immigration detention facilities into the community.

More than 3,600 vulnerable people were released from immigration detention facilities into Community Detention.

4,000 people received Red Cross support to live independently in the community while on a Bridging Visa.

More than 850 unaccompanied minors received housing and support while in Community Detention, through Red Cross and partner agencies.